Depth: 0-20m at the plateau transforming to a deep wall.

Location: Around 90 mins from central Hurghada.

Conditions: Somewhat exposed to weather since located in open sea.

Umm Gamaar is a coral surrounded island stretching in a north-south direction with a plateau at each end. A sheer wall runs along the east as well as the west. The moorings are situated over the south plateau.

The east side is a dramatic deep wall accentuated by coral formations covered with soft corals that reach out towards the blue. The first two formations from the south have cracks running through that are just begging photographers to stop and shoot. The next formation has a cavern with a sandy ledge at its base on 29m. The south plateau, a sandy bottom partially covered with coral blocks, may not be the main attraction here, but is often visited by free swimming moray eels, big silver sweetlips and napoleon wrasse.

On the odd occasion, white tip reef sharks patrol the wall and this is one of the few places in the Hurghada area that now and then reports a manta. The corals on the wall are clouded by anthias and silversides. Glassfish, typically accompanied by red tooth groupers, fill up every cavity. Jackfish and tuna hunt in the big schools of fusilier on the wall side, while barracudas, suspended in mid water, await their prey. 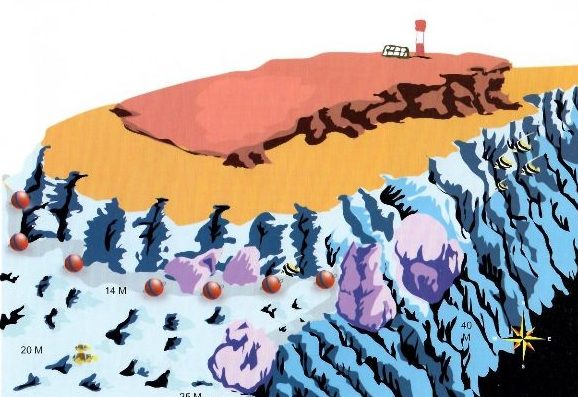