Around 80 mins from central Hurghada.

The moorings are located at the south side of the Giftun Police station on top of a 15-25m deep plateau. At the northeast corner, this transforms into a shelf that stretches north, giving way to a steep wall that is hugely popular with technical divers.

At this site a drift is the natural choice even if the plateau also can be reached from the mooring. You drop next to a vertical wall and follow the current due south as it gives way to a shelf getting wider further south. When the main reef curves to the west over the plateau the drop-off suddenly makes a few turns giving the edge a zigzag contour. 15m deeper (around 45m) there is a tunnel, which although spectacular, is out of reach for recreational divers. All over the drop-off in this area huge gorgonias form a virtual jungle swaying in the current, whereas soft corals squeeze in wherever there is a space big enough to root. The plateau itself is a semi-covered coral garden leading up to the shallow parts of the wall, as well as the moorings.

The gorgonias serve as a smokescreen for the longnose hawkfish that awaits its prey. Turtles swim by over the coral garden on occasion, as well as napoleon wrasse. Free swimming moray eels cruise the wall, and out in the blue pelagic species like tuna and barracuda patrol 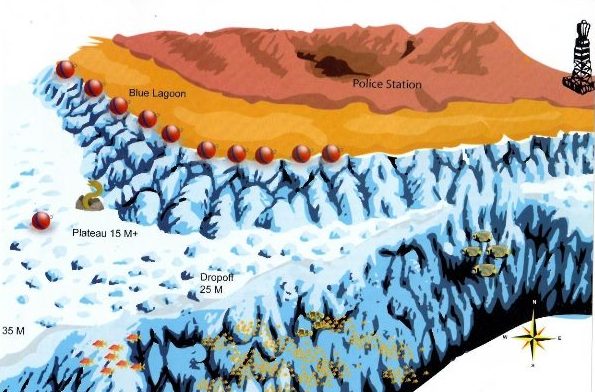